Premiere Limited is the base set of Star Trek CCG 1st Edition. It is published by Decipher on 10 November 1994. The set consists of 363 cards with images from all seasons of the Star Trek: The Next Generation television series.

Decipher made 250 gift boxes as gifts for supporters and fans. Included in each gift box (9x7x13 cm) is a complete set of 363 cards, a rulebook similar to the one one inserted in the starter decks, and a special certificate card.

The following cards have had corrections made by The Continuing Committee (see Physical Errata Cards). These cards are virtual cards. 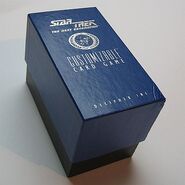 Premiere Limited Booster Box
Add a photo to this gallery

Retrieved from "https://cardguide.fandom.com/wiki/Premiere_Limited_(Star_Trek_CCG_1E)?oldid=328025"
Community content is available under CC-BY-SA unless otherwise noted.